Mad Monsterz cannot be described by any one genre, it is an explosive and imaginative combination of visual and audio that means to tell a tale and assault all of the senses. Armed with a punk-rock sound, old-school horror themes and a name inspired by the cult classic, they officially took form in 2016.

After a long search for suitable and passionate members, Nhell headed up the band with vocals and guitar while Paul manned the drums (along with help from a few guest musicians) and the Mad Monsterz adventure had begun. Shortly after the formation, they released their first official single  ‘The Anti-Love Song’ (aka ‘The purge’) which was released along with the official music video, all of which was totally self produced. This first-ever production was quickly shared by many on radio, utube, podcast and social media and so the unconventional concept of the band was born with the idea that they would not be a live performance group, but rather a mixture of songs/soundtrack with visual comic-style storylines. Inspired by a combination of dark and interesting humour with the spirit and aesthetics of 50s/60s horror comics, to make each song released like a new episode in the Mad Monsterz tales… And it was then that the iconic entity ‘Juste Le Clown’ was brought to life.

This cynical and twisted character is able to travel back in time and he becomes the story teller, giving us the tales of ‘The mad Circus’, which in fact is a metaphor for the inner most depths of his mind. This madness is embellished with music, video and even emmersive 360° virtual reality experiences. Juste Le Clown is shrouded my mystery as no one dead or alive has ever known his identity or who is behind the mask, forever hidden and never to be revealed.

With this, the Mad Monsterz tales takes shape in 2017 with the launch of the second single ‘Mrs Claws’, setting the stage (so to speak) for what’s to come. This first mini story, illustrated by artist Doll Irys, sees Me Clown accompanied by Mrs Claws in the first 360° VR video project, created with the intention to fully engross it’s viewer into the experience.

In 2018, the decision to continuously incorporate 360/VR into this fantastical universe materialised and thus the 3rd single ‘Worse Than It’ was released. This part of the story highlights the beginnings of ‘Juste Me Clown’  and saw the addition of Guilaume to the Mad Monsterz family as offi I am bassist and sound technician. Later that same year, in collaboration with the artist Legoya, the first album was brought to reality, aptly entitled ‘Welcome To The Mad Circus’ and is due to be released early in 2020.

Currently Mad Monsterz is continuing forward on their journey, focusing on the release of the album and it’s connected videos respectively in anticipation for the launch and continue on other works that also feature many special guests (actors, dancers, musicians and artists of all kinds)… so expect to see more of tthe monsters and their enthralling tales of madness !

Combining dark and fantastic humor, the Mad Monsterz Tales are a tribute to the aesthetics and spirit of the EC Comics, horror comics of the 50s / 60s (Tales from the Crypt, Vault of Horror …) having cradled the imagination generations of teenagers.

Told by Just LeClown, a cynical and endearing character able to travel back in time, these comic stories, embellished with immersive 360 ° videos, take you into the “Mad Circus”, a metaphor for Juste’s brain and memories.

*Virtual Reality (VR) is a technology that allows you to immerse yourself in a digitally created artificial world with 360-degree video.

Get the first adventures of Juste LeClown ! 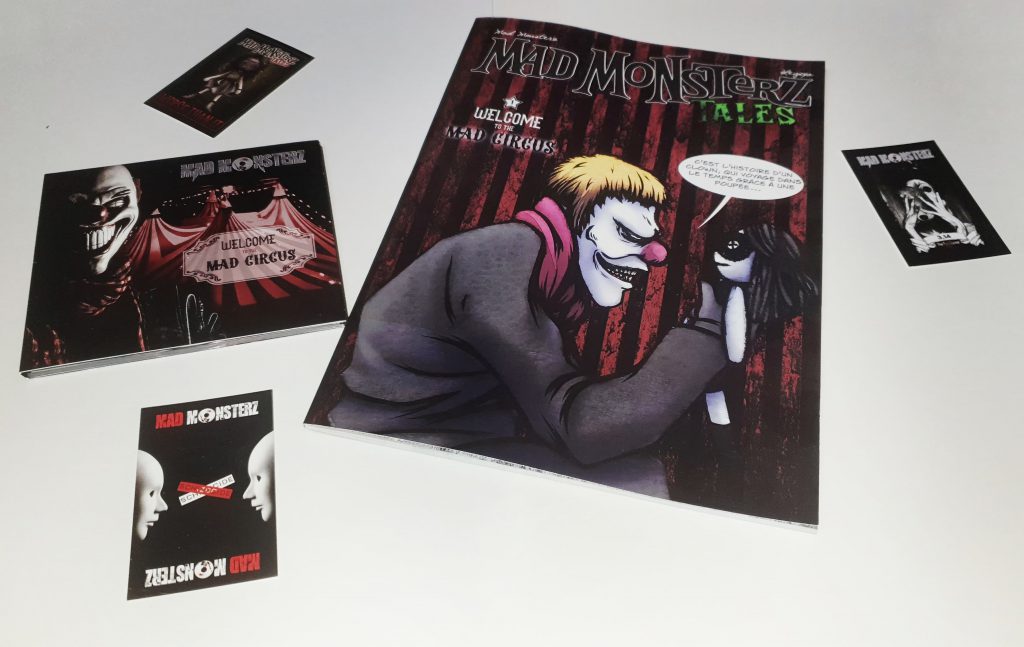